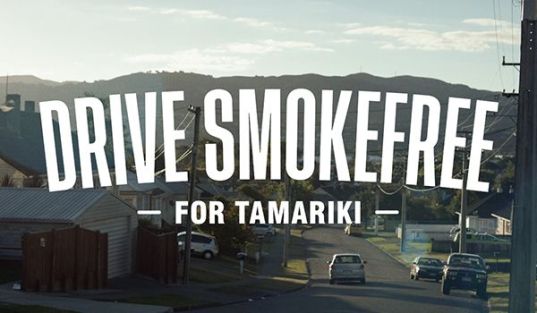 After a decade of campaigning, community groups across the motu are celebrating a milestone this month as a law comes into force making it illegal to smoke or vape in cars with children and young people present.

The change will benefit the hundreds of young people under the age of 18 who are exposed to second-hand smoke in cars each year, which can lead to serious health impacts including asthma, glue ear, chest infections and an increased risk of sudden unexpected death in infancy (SUDI).

Bridget Rowse, Chair of the National Smokefree Cars Working Group, says the push for smokefree cars has been a grassroots movement led by New Zealanders with a collective desire to protect tamariki.

“This change is going to lead to better health outcomes for some of the most vulnerable members of our community. Opening the windows is not enough to prevent the harm caused by lingering second-hand smoke in cars, which is why it’s so important to drive smokefree. We have seen great work happening throughout New Zealand to support whānau to take this step to protect their children,” says Bridget.

The law change is the culmination of a years-long nationwide effort, which saw community groups and advocates rallying behind this cause. With the law taking effect, organisations in 14 regions are being supported by Te Hiringa Hauora | Health Promotion Agency to plan and run activities to educate, inform and encourage people to make the change and drive smokefree.

“With local people and organisations steering this, each region has taken its own approach to getting the word out about this milestone in a way that speaks to their respective community. We’re looking forward to seeing the smokefree cars activity continue to roll-out across the country over the summer,” says Bridget.

As well as things like promotions at community venues, quizzes and sports tournaments, some regions are showcasing local talent. In the Manawatū, five local kuia and their mokopuna have been enlisted as the region’s newest models to feature as the faces of its ‘Drive Smokefree for Tamariki’ billboard and signage campaign.

In the Hutt Valley, the #TAGS rangatahi group is celebrating after years of work in its local community that’s brought together schools and sports clubs, the local council, marae and health services. Working with Regional Public Health, the rangatahi are spreading the word through a video campaign featuring young people delivering drive smokefree messages which will be shared with the community.

Leah Clark, Public Health Advisor at Regional Public Health and founding member of the National Smokefree Cars Working Group, has been involved with smokefree cars since 2011 through her work with #TAGS and other advocates around the country. Leah says momentum built with support from a wide range of groups, not least of which are the youth who will directly benefit from this change.

“Our young people have shown enduring enthusiasm, initiative and an eagerness to take ownership of encouraging whānau to make the change and drive smokefree. Children and young people have been some of our strongest advocates and have played an important role in New Zealand’s journey towards smokefree cars,” says Leah.

The Smoke-free Environments (Prohibiting Smoking in Motor Vehicles Carrying Children) Amendment Act 2020 was passed in May 2020, and comes into force on 28 November 2021. From 28 November, it will be illegal to smoke or vape in cars carrying a child or young person under the age of 18.

Te Hiringa Hauora is running the Drive Smokefree for Tamariki campaign on behalf of the Ministry of Health around the law change.