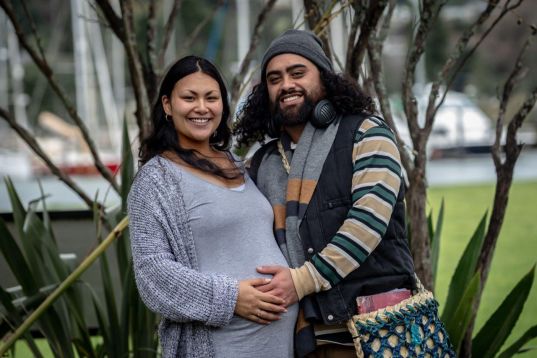 Evidence is building in support of an antenatal programme from Northland that is setting an example for nationwide maternity care and enduring issues of equity for Māori.

Ngā Wānanga o Hine Kōpū reconnects pregnant Māori women and their whānau with mātauranga Māori to explore conception, pregnancy, birth and parenting. The wānanga was designed in, by and for the women of the small, solution-focused communities of Te Tai Tokerau. But its approach has resonance throughout New Zealand.

Now an independent evaluation of the wānanga, echoes the voices of whānau who said Hine Kōpū awoke in them a spirit of self-determination. A summary of the evaluation by Kataraina Pipi, Kate McKegg and Huhana Moselen shows Hine Kōpū is about much more than parents learning information that is deemed clinically important for good birth outcomes.

Instead, Hine Kōpū is a shared whānau experience of healing, connecting and exploring. It is about reclaiming Māori identity, cultural confidence and giving rise to tino rangatiratanga in the birthing experience. There is evidence of this confidence flowing through into whānau identifying their own aspirations for their future. The wānanga is transforming lives, far beyond the outcomes expected in the mainstream antenatal education service. Read the report.

The special status of women

Hine Kōpū emphasises the special place of “Hine” in the Māori universe, the ira wāhine or the feminine in Māori spirituality, including the myriad of atua wāhine. It celebrates women and pregnancy. Central to its philosophy is that wāhine hapū (pregnant women) have a special, prized status in the whānau.

“That’s an idea that some of these wāhine have never felt, or seen, in their lives” says Koha Aperahama (Ngāti Hine, Ngā Puhi) founder of Ngā Wānanga o Hine Kōpū, a qualified nurse and trained midwife. She is employed by the Northland District Health Board (DHB).

“The wānanga offers a safe space that affirms this along with the hope that māmā and whānau are more confident to parent, have good relationships, navigate the maternity care system and make decisions for them and their pēpi.”

Meeting the needs of Māori women

Te Tai Tokerau has the highest Māori birth rate in New Zealand with 50% of births in 2014 and 2015 being to Māori mothers. However only 20% of eligible Māori women attend mainstream antenatal classes, Northland DHB data shows. It is believed one of the reasons for that is the need for culturally relevant antenatal education and care in the region.

The report says wāhine Māori have a strong desire for mātauranga Māori or indigenous knowledge about hapūtanga (things to do with pregnancy) but are frustrated at the lack of access to Māori specific resources within the maternity system.

It claims Hine Kōpū is at the forefront of weaving traditional, localised, Māori birthing mātauranga and Western science together. As a result, it is bringing wāhine of Te Tai Tokerau through the door like never before.

“I learnt a lot about tikanga and kawa during hapūtanga and birth,” says one young māmā in the report, “It felt like such a safe space to have kōrero about it all. It also felt amazing to be surrounded by health professionals who understood Māori culture.”

The approach that Hine Kōpū takes; integrating precolonial narratives, tikanga and Māori birthing practices into maternity education, forces the health system to be more culturally relevant and safe for Māori communities to access. This type of change has the potential to be applied to nationwide health reforms says Tanya Radford, who leads the First 1,000 Days programme at Te Hiringa Hauora.

“Building a health system that focuses on equity and generations of quality of life for mothers and babies is critical. Hine Kōpū shows how it can be done and what can happen when communities are enabled to tailor solutions for their own people including for their wairua, identity and culture”.

Koha agrees the reclamation of Māori knowledge can be profound.

“Even if they haven’t heard it before, generations of tūpuna knowledge about conception, birth, life and death resonates with our wāhine. There’s a real desire to reconnect this information to their own story” says Koha.

The short film introduces Tessa Davis-Hall (Te Rarawa, Ngāti Whātua), hapū with her fifth baby. Only months before, her infant son had died suddenly. She was angry, whakamā (ashamed/resentful) and scared about being hapū again.

“Without even knowing my story, Koha was saying things I needed to hear like ‘sometimes our babies choose to go back to Te Kore’. I was like, ‘that’s what happened with my Leonardo’. It made sense to me”.

Tessa’s fears of another tragedy were addressed through safe sleep wānanga. She received a wahakura waikawa (flax bassinet) and learned the weave is deliberately loose to allow for airflow.

Tessa’s whānau says that after Hine Kōpū, Tessa is determined to achieve, be successful and is healing.

“Wāhine hapū and whānau describe the wānanga as profound and transformational. We have to pay attention to that,” says Tanya Radford, “The effects are improving birthing experiences and birth outcomes, while delivering equity for māmā, pēpi and whānau.”

“The wānanga is quite literally changing the future choices of generations of families overnight.”

Tanya believes the philosophy and design of Hine Kōpū is an inspiration for others to look to.

“When we listen to the expertise of whānau we can adapt a new system that reflects their aspirations, recognises mātauranga Māori and moves beyond screening people for issues, to helping them achieve their dreams”.